Center for the Study of Political Graphics 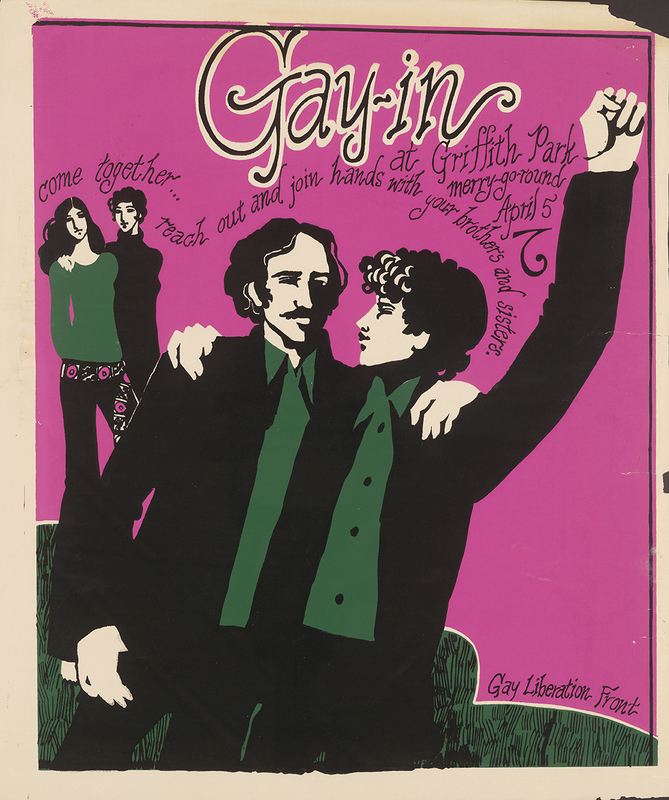 The first Griffith Park Gay-In took place May 30, 1968 and was an annual event for three years. Griffith Park had long been a cruising area for gay men at night, but by 1968 the gay liberation movement decided to hold a festival during the middle of the day for all LGBT individuals. It was a precursor to gay pride festivals that followed in major cities after the Stonewall riots. The second Griffith Park Gay-In was held in July 1969 and took less of a festival tone and more overtly political in nature. The Gay-In festivals suffered constant police harassment, and the April 5, 1970 event, promoted by this poster, was one of the most violent, with police in riot gear forming a charging line.

Center figure with moustache is self-portrait of the artist, Bruce Reifel.

Copyright status unknown; may be protected by copyright law. 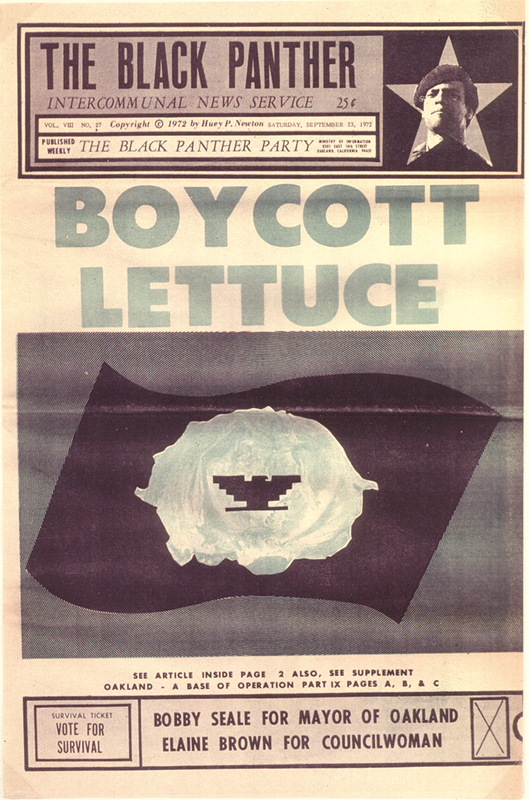 The Black Panther Party (BPP) was very supportive of César Chávez and the United Farm Workers’ movement and their boycott of grapes, lettuce, Gallo wine, Safeway markets, etc. All of this was extensively promoted in The Black Panther, the BPP newspaper. The BPP also helped publicize agricultural pesticide dangers for farm workers and consumers. In July 1973, the BPP launched a major boycott against six Oakland Safeway supermarkets for selling non-union produce. In addition to publishing many articles on the UFW and the boycott, The Black Panther frequently carried a fundraising coupon to send support directly to the UFW. The BPP supported the Chicano movement in many other ways, such as in funding the publication of the Chicano newspaper, Basta Ya!, and in defending Chicano political prisoners, including Los Siete (The Latino Seven).

Under copyright; used by CSPG for educational and research purposes only. Distribution or reproduction beyond that allowed by fair use requires the written permission of the copyright owners. 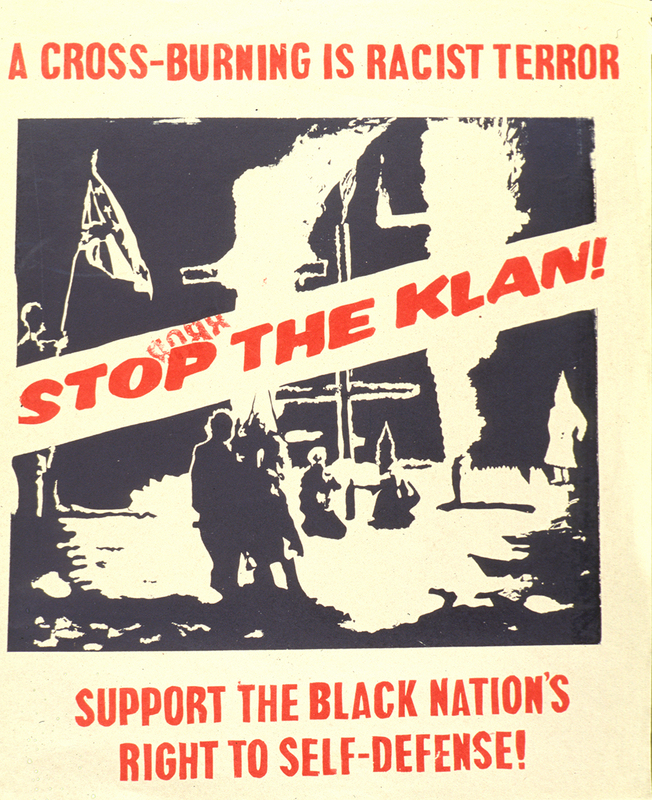 In 1983, three crosses were burned in Lake View Terrace, an ethnically diverse Los Angeles community. It was the first known collaboration in U.S. history of the Ku Klux Klan, the Aryan Nation, and the U.S. Nazis.  They had applied to the fire department for a permit to burn crosses on private property.  When turned down, they burned the crosses anyway, and were arrested.

Under copyright; used by CSPG with permission. 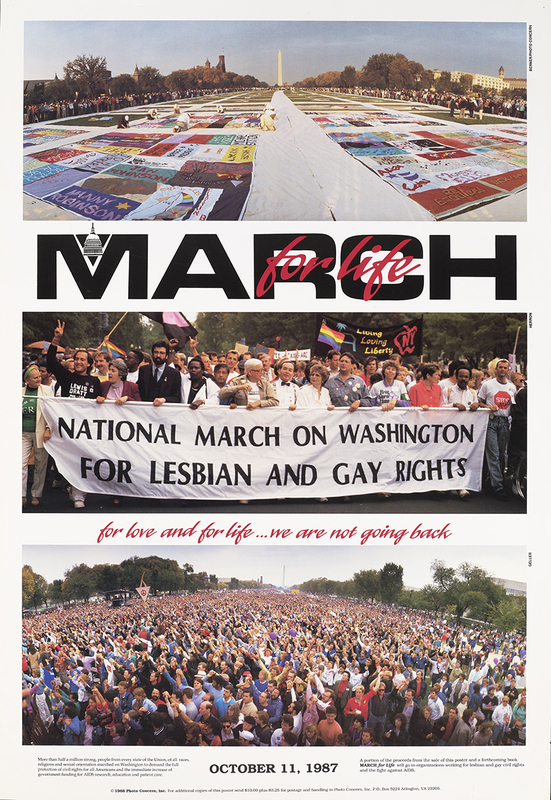 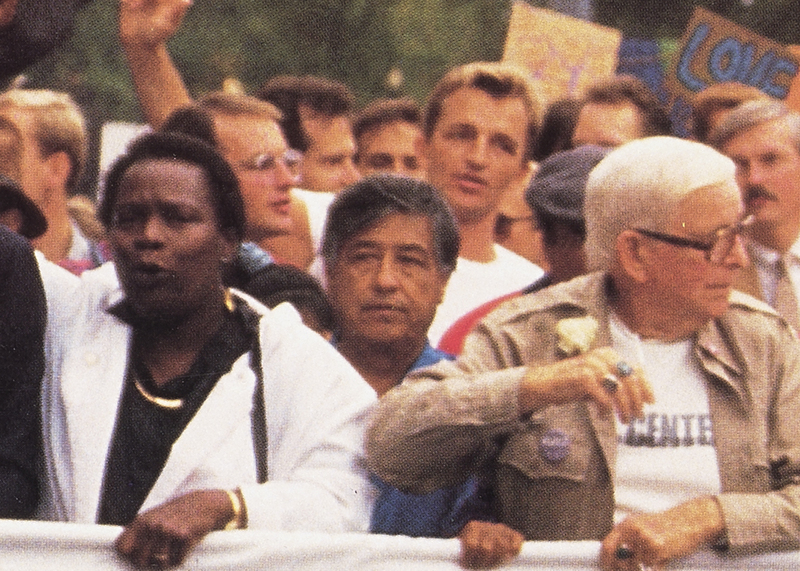 On October 11, 1987, more than a half million people participated in the second national March on Washington for Lesbian and Gay Rights. The poster shows three images from the six-day-long event, including the display of the NAMES Project AIDS Memorial Quilt, the march itself, and the rally on the National Mall. The March succeeded in bringing national attention to the impact of AIDS on gay communities, while the unveiling of the quilt offered a powerful tribute to the lives of the thousands killed by the pandemic. The poster’s demands include the full protection of civil rights for all Americans and the immediate increase of government funding for AIDS research, education, and patient care. Many prominent activists participated in the march, including Eleanor Smeal, Byllye Avery, Cesar Chavez, and Morris Kight who are pictured in the center panel supporting the banner.

See detail:  Cesar Chavez is internationally known as a labor organizer and co-founder of the United Farm Workers Union. Few are aware of his activism for LGBTQ rights.

© 1988 Photo Concern, Inc.; Used by CSPG for educational and research purposes only. Distribution or reproduction beyond that allowed by fair use requires the written permission of the copyright owners. 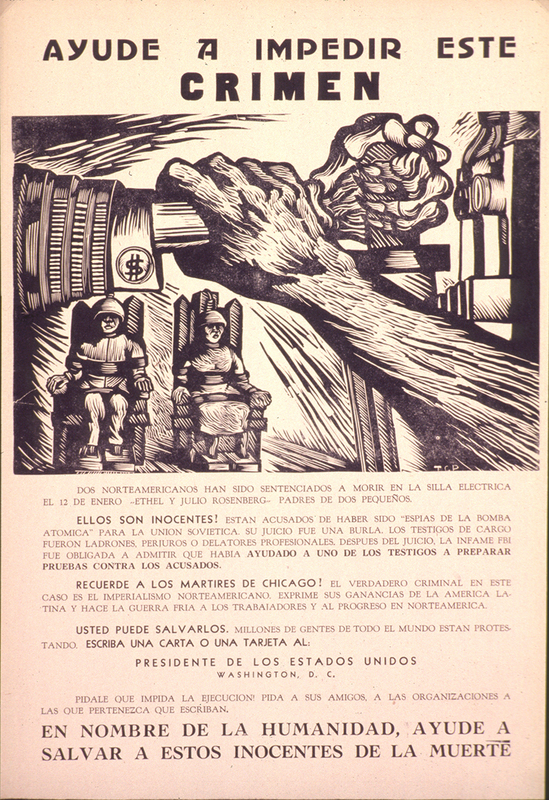 In 1950, in an atmosphere of anti-Communism directed against radicals in the Jewish community, the Federal Bureau of Investigation arrested Julius Rosenberg (1918-53), an electrical engineer, and his wife Ethel (1916-1953). They were convicted and sentenced to death for conspiracy to transmit secrets of the atomic bomb to the Soviet Union. Despite an international campaign from the President of France, Pope Pius XII, Albert Einstein, Martin Buber, Bertrand Russell, Jean Paul Sartre, Reinhold Niebuhr, Pablo Picasso, Israel's Chief Rabbis and many others, President Eisenhower refused to grant clemency and the Rosenbergs were electrocuted at Sing Sing Prison, June 19, 1953. They were the only Americans ever executed for espionage by judgment of a civilian court. This poster was part of the international campaign to stop their execution.

Copyright status unknown; may be protected by copyright law.